This policy brief is part of a larger research report, Making ESSA’s Equity Promise Real: State Strategies to Close the Opportunity Gap, that describes how states are using opportunities in ESSA to better support historically underserved students through the thoughtful selection of specific equity measures in their accountability and improvement systems. To this end, the full report suggests focusing attention on students furthest from opportunity by taking steps to

The Every Student Succeeds Act (ESSA), passed in December 2015, gives states the opportunity to create new approaches to school accountability and continuous improvement. These approaches, if informed by well-chosen indicators of school opportunity and performance, have the potential to create more inclusive and equitable learning environments for historically underserved students.

Along with measures of academic achievement (student performance on state assessments in English language arts and mathematics, which may include growth in proficiency), graduation rates, and English language proficiency, ESSA requires states to include at least one indicator of school quality or student success.

Now that all states have received approval from the U.S. Department of Education for their plans for statewide accountability and improvement systems, a number of states are taking advantage of the opportunities provided by ESSA to measure the extent to which their students are supported and provided with equitable educational opportunities.

This brief specifies which states are making efforts to reduce suspension rates in their ESSA plans and describes how some states intend to measure and use information from this indicator to create more equitable and inclusive learning environments for all students.

Over the past several decades, researchers have noted that the overuse of suspensions and expulsions, particularly for students of color, has contributed significantly to dropout rates and the perpetuation of the “school-to-prison pipeline.”Kim, C., Losen, D., & Hewitt, D. (2010). The School-to-Prison Pipeline: Structuring Legal Reform. New York, NY: New York University Press. Further, students of color and those with disabilities are suspended at a rate that is disproportionate to that of their White and nondisabled peers for comparable behaviors.U.S. Department of Education Office for Civil Rights. (2016). A first look: Key data highlights on equity and opportunity gaps in our nation’s public schools. 2013–2014 civil rights data collection. Washington, DC: U.S. Department of Education. High rates of school exclusion have been encouraged by zero-tolerance policies, which assign explicit, predetermined punishments to specific violations of school rules, regardless of the situation or the context of the behavior.American Psychological Association Zero Tolerance Task Force. (2008). Are zero tolerance policies effective in the schools? An evidentiary review and recommendations. American Psychologist, 63(9), 852–862.

Under ESSA, all states are required to include rates of in-school and out-of-school suspensions, expulsions, school-related arrests, referrals to law enforcement, and incidences of school violence (including bullying and harassment) on their state and local report cards. In addition, nine states are including a measure of suspension in their statewide accountability and improvement systems either for school identification (three states) or improvement purposes in these identified schools (six states) (see Figure 1). Three of these states are also including a student expulsion measure for improvement purposes. An additional 20 states and the District of Columbia describe in their state plans how they are using suspension rate information within their broader system to inform continuous school improvement across all schools. 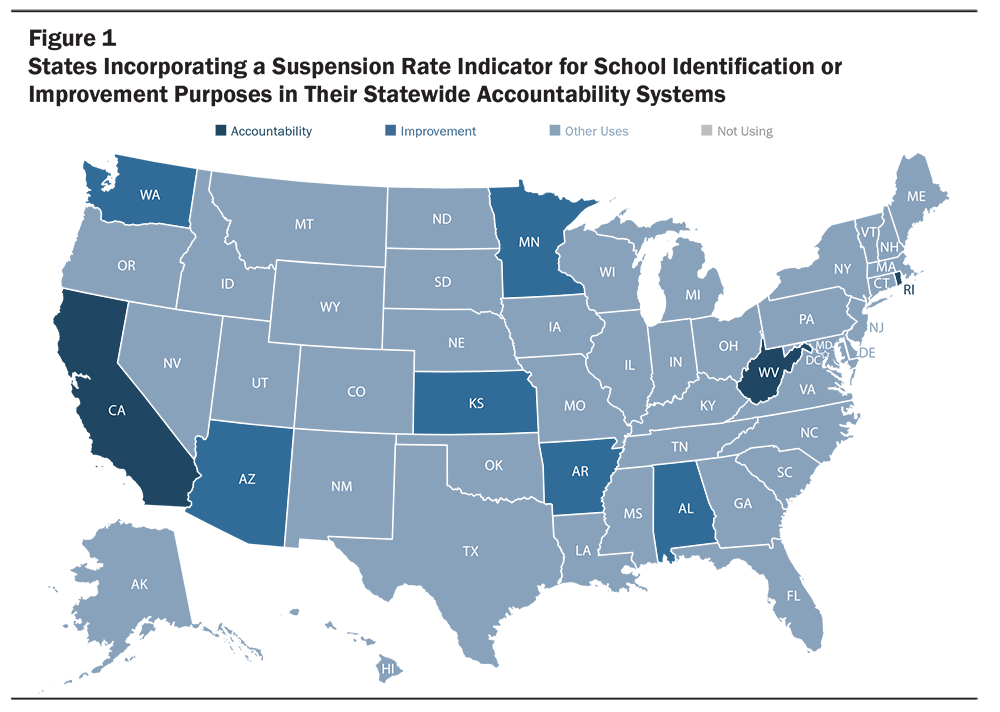 California is using a suspension rate indicator in its accountability system to measure school quality for all k–12 students. The state establishes different sets of cut scores for elementary, middle, and high schools. Suspension calculations include both in-school and out-of-school suspensions in the numerator, and the denominator is determined by cumulative enrollment of all students enrolled at a school during the school year.Torlakson, T. (2017). California school dashboard release: Suspension rate and English learner progress indicators. Sacramento, CA: California Department of Education. California disaggregates the data at both the school and student-group level, and it compares yearly suspension rates to calculate annual changes. The state supports districts in reducing the overuse of discipline practices that remove students from the classroom by sharing online information on strategies and interventions, such as restorative justice programs and other practices that replace high-risk punitive discipline practices with positive interventions. Finally, California is providing Title I educators with technical assistance in the use of a multitiered system of supports to promote positive behavioral practices at the local level.California Every Student Succeeds Act (ESSA) Consolidated State Plan. Sacramento, CA: California Department of Education.

The Rhode Island Department of Education provides state-developed resources for schools to reduce the need for disciplinary actions, including suspension. These resources will be funded through competitive state grants using ESSA Title IV, Part A funds (Student Support and Academic Enrichment grants) and will include school-based mental health services, mentoring and school counseling, schoolwide positive behavioral interventions and supports, and programs to reduce exclusionary discipline practices. To identify and share models of best practices to improve school climate, the Rhode Island Department of Education supports a Community of Practice, which hosts open meetings three times a year that provide presentations and opportunities for discussions between educators and practitioners.

West Virginia measures disciplinary exclusions in its pre-k–12 accountability system as the percentage of students at each school who receive zero out-of-school suspensions within a school year, reflecting the state’s effort to promote the use of alternative responses that maximize student access to instruction. For example, the West Virginia Department of Education promotes non-exclusionary approaches to discipline, such as positive behavior programs, character education, peer mediation, conflict resolution, prevention of harassment, and responding to intimidation and substance abuse. West Virginia outlines recommendations to schools, such as responding to minor behavior violations with student conferences or changes in the student’s schedule rather than through the use of exclusionary practices.West Virginia Department of Education. (n.d.). West Virginia Manual for Expected Behavior in Safe and Supportive Schools (Policy 4373). Charleston, WV: Author. The state supports districts in using a tiered intervention approach that includes a comprehensive system of mental health services for students and provides training for educators in how to use both the state’s early warning system and a longitudinal data system that will allow educators to sort and filter data based on academics, attendance, behavior, and other available data. As a result, educators are able to make timely and actionable subgroup-specific decisions that reduce disparities between student groups.West Virginia Every Student Succeeds Act (ESSA) Consolidated State Plan. Charleston, WV: West Virginia Department of Education.

States and districts can improve the utility of their suspension indicator and help schools respond productively by:

Resources on Suspension and Expulsion Rates

To see a state-by-state summary on how states are using a Suspension Rate indicator, see page 7 of this downloadable brief or explore this interactive map for individual state information.