This brief summarizes the results from a study of the recruitment, employment, and retention of minority k-12 teachers. The study examines the extent and sources of the minority teacher shortage—the low proportion of minority teachers in comparison to the increasing numbers of minority students in the school system. Using the National Center for Education Statistics’ Schools and Staffing Survey/Teacher Follow-Up Survey, we found that efforts over recent decades to recruit more minority teachers and place them in disadvantaged schools have been very successful. But these efforts have been undermined by the high turnover rates of minority teachers—largely because of poor working conditions in their schools. The conditions most strongly related to minority teacher turnover were the degree of teachers' classroom autonomy and input into school decisions—both increasingly important when coupled with accountability pressures.

For the past several decades, shortages of minority teachers have been a big issue for the nation’s schools. There is widespread agreement that our elementary and secondary teaching force should “look like America.” But it is also widely lamented that as the nation’s population and students have grown more racially and ethnically diverse, the teaching force has done the opposite and grown less diverse. The result, in this view, is that minority students in the nation’s schools increasingly lack minority adult role models and contact with teachers who understand their racial and cultural background. The minority teacher shortage, it is held, is a major reason for the minority achievement gap and, ultimately, unequal occupational and life outcomes for disadvantaged students. In short, the minority teacher shortage is a major civil rights issue.

The main source of this shortage, conventional wisdom holds, lies in problems with the teacher supply pipeline. Too few minority students enter and complete college, and those who do have an increasing number of career and employment options aside from teaching. Moreover, when minority candidates do seek to enter teaching, this view holds that they encounter barriers—in particular, teaching entry tests, on which minority candidates have lower pass rates. The result is the minority-teacher shortage.

The main policy response to this problem, understandably enough, has been to try to recruit more minority candidates into teaching. In recent decades, numerous government and nongovernment organizations have tried a variety of minority-teacher recruitment programs and initiatives, including future-educator programs in high schools, partnerships between community colleges and four-year teacher education programs, career ladders for paraprofessionals in schools, and alternative teacher certification programs. Support for these efforts has been substantial. For instance, beginning in the late 1980s, the Ford Foundation, along with the DeWitt Wallace-Readers’ Digest Fund, committed more than $60 million to minority teacher recruitment and preparation programs. Many of these initiatives have been designed to bring minority teachers into schools serving predominantly minority student populations, often in low-income, urban school districts. Some of these initiatives have been designed specifically to recruit male minority teachers, who are often considered to be in the shortest supply. More than half the states have had some sort of minority teacher recruitment policy or program in place. Have these efforts been successful? Has the teaching force grown more diverse? And if not, why not?

Recently, we undertook to answer these questions. We analyzed two-and-a-half decades of data from 1987 to 2013 from the Schools and Staffing Survey (SASS) and its supplement, the Teacher Follow-Up Survey (TFS). This national survey, conducted by the U.S. Department of Education and the Census Bureau, is the largest and most comprehensive source of information on teachers in the nation. We did not focus on the contentious question of whether minority teachers are better at teaching minority students. Rather, our objective has been to use the best national data available to focus the debate on the extent and the sources of minority-teacher shortages.

We sought to address the four questions that follow:

The data clearly show that there continues to be a persistent gap between the percentage of minority students and the percentage of minority teachers in the U.S. school system. For instance, in the 2011–12 school year (the most recent SASS data available), 37% of the nation’s population was minority, and 44% of all elementary and secondary students were minority, but only 17.3% of all elementary and secondary teachers were minority. But the data also show that this gap is not due to a failure to recruit minority teachers. Instead, the gap has persisted in recent years largely because the number of non-minority students has decreased, while the number of minority students has increased.

Moreover, minority teachers are overwhelmingly employed in public schools serving high-poverty, high-minority, and urban communities. Minority teachers are two to three times more likely than non-minority teachers to work in such hard-to-staff schools. Hence, the data show that in spite of competition from other occupations for minority college graduates—and in spite of apparent barriers to entry—efforts over recent decades to recruit more minority teachers and place them in schools serving disadvantaged and minority student populations appear to have been successful. This has been something of an unheralded victory. While commentators and researchers have at times tended to discuss the minority teacher shortage in pessimistic terms—often accompanied by calls for more funding and support—the data suggest that such efforts and expenditures have worked. 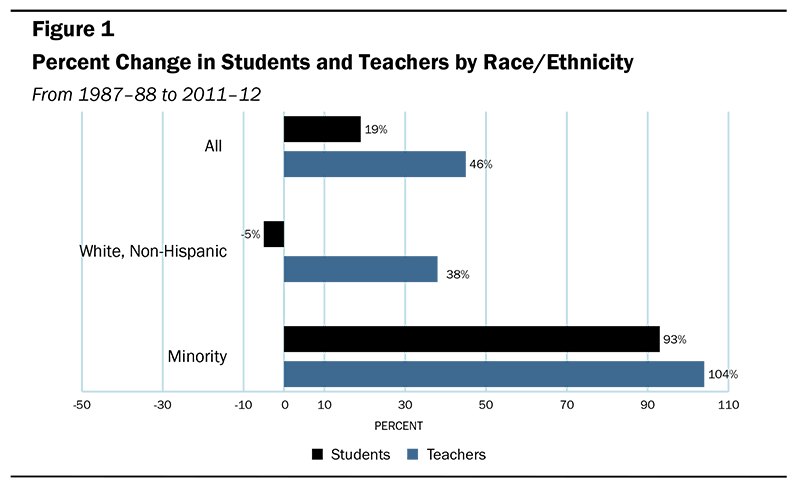 Some turnover and departure of teachers from their jobs is normal, inevitable, and beneficial. For individuals, departures that lead to better jobs, in teaching or elsewhere, are a source of upward mobility. For schools, departures of low-performing employees can enhance school performance. For the educational system as a whole, some teacher career changes—such as moving from one school to another or leaving classroom teaching for other education-related jobs—do not represent a net loss of human capital to the educational system.

However, from the viewpoint of those managing particular schools and those seeking to employ more minority teachers in their schools, none of these types of departures are cost-free. All have the same effect: They reduce the number of minority teachers in the classroom. One consequence of such turnover, our analysis reveals, is that it undermines efforts to address the minority teacher shortage. This is starkly illustrated with data from 2004–05. The data show that at the beginning of the 2003–04 school year, about 47,600 minority teachers entered teaching; however, by the following year, 20% more—about 56,000—had left teaching. These data convey an image of a revolving door: too many going in one door and out another. 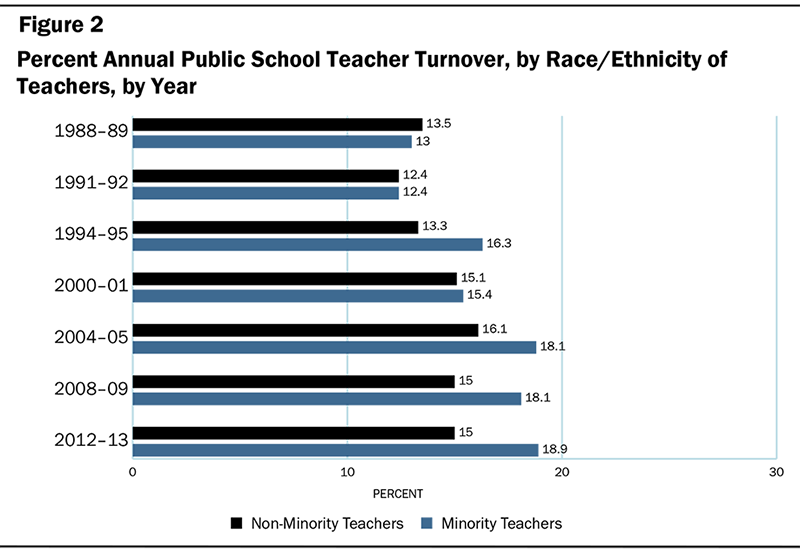 What does matter when minority teachers decide whether to stay or depart are school working conditions. The same hard-to-staff schools that are more likely to employ minority teachers are also more likely to have less desirable working conditions. And these less desirable conditions, our data suggest, account for the higher rates of minority-teacher turnover. In other words, the data indicate that minority teachers are employed at higher rates in schools serving disadvantaged students, but also depart at higher rates because these same schools tend to be less desirable as workplaces. The tragedy is that the success of minority teacher recruitment efforts have been undermined. Even more striking is what we found when we looked at which conditions were most correlated with minority teachers’ departures. Salary levels, the provision of useful professional development, and the availability of classroom resources all had little association with whether they were likely to depart. The strongest factors by far for minority teachers were the level of collective faculty decision-making influence in the school and the degree of individual instructional autonomy held by teachers in their classrooms. Having influence and autonomy in the workplace are, of course, key hallmarks of respected professions. Schools that provided more teacher classroom discretion and autonomy, as well as schools with higher levels of faculty input into school decision making, had significantly lower levels of minority teacher turnover.

What Can Be Done?

In supply-and-demand theory, any imbalance between labor demand and labor supply can be referred to as a shortage, in the sense that too few individuals are able and willing to offer their services under given wages and conditions. From this perspective, the problems many schools encounter in retaining minority teachers can technically be referred to as a shortage. However, in the context of minority teachers and schools, the term shortage is typically given a narrower connotation: an insufficient production and recruitment of new minority teaching candidates in the face of increasing minority student enrollments. These differences in terminology and diagnosis have crucial implications for prescription and policy.

Of the more than 56,000 minority teachers who left teaching in 2004–05, about 16,000 retired, 30,000 left to pursue another job or career or because of job dissatisfaction, and 10,000 left for other reasons. Improving the retention of minority teachers recruited into teaching by addressing the factors that drive them out could prevent the loss of investment to recruit them in the first place and also lessen the need for more recruitment initiatives. All of this suggests that we should develop teacher recruitment and retention initiatives together. Recruitment alone has not solved either the problem of minority-teacher shortages or of filling positions in hard-to-staff schools. In plain terms, it makes no sense to put substantial effort into recruiting candidates to teach in schools serving disadvantaged students if those schools are not also desirable workplaces.

Our findings support the view that school organization, management, and leadership matter, and they shift attention to discovering which policy-amenable aspects of schools as organizations — their practices, policies, characteristics, and conditions—are related to a school’s ability to staff classrooms with minority teachers. The data suggest that poor, high-minority, urban schools with improved working conditions will be far more able to do so. To be sure, altering these conditions may not be easy. However, unlike reforms such as teacher-salary increases and class-size reduction, changing some conditions, such as teachers’ classroom autonomy and faculty’s schoolwide influence, should be less costly financially—an important consideration, especially in low-income settings and in periods of budgetary constraint.

This report benefited from the insights and expertise of two external reviewers: Gloria Ladson-Billings, Kellner Family Chair in Urban Education at the University of Wisconsin-Madison; and Matthew Kraft, Assistant Professor of Education and Economics at Brown University. We thank them for the care and attention they gave the report. Any remaining shortcomings are our own.

Ingersoll, R. (2015). What Do the National Data Tell Us About Minority Teacher Shortages? In The State Of Teacher Diversity In American Education. (Section III, pp 13-22). Washington, DC: Albert Shanker Institute.

Ingersoll, R. & May, H. (2011a). Recruitment, retention, and the minority teacher shortage. CPRE Research Report #RR-69. Philadelphia, PA: Consortium for Policy Research in Education, University of Pennsylvania and Center for Educational Research in the Interest of Underserved Students, University of California, Santa Cruz.

Minority Teacher Recruitment, Employment, and Retention: 1987 to 2013 (research brief) by Richard M. Ingersoll and Henry May is licensed under a Creative Commons Attribution-NonCommercial 4.0 International License.

Research in this area of work is funded in part by the S. D. Bechtel, Jr. Foundation. Core operating support for the Learning Policy Institute is provided by the Ford Foundation, the William and Flora Hewlett Foundation, and the Sandler Foundation.