Is the Looming Teacher Shortage a Serious Problem? Should the State Take Decisive Action?

In fall of 2015, a Field Poll of California voters revealed that Californians are well aware of the emerging shortage of K-12 public school teachers and think the state should take decisive action to rectify the situation.The poll, cosponsored by EdSource and the Learning Policy Institute, was conducted by The Field Poll between September 17 and October 4, 2015. It surveyed a representative sample of 1,002 California registered voters on landlines and cell phones in both English and Spanish.. Eighty-six percent of voters view the shortage as a serious problem, and nearly two-thirds see it as very serious. (See Figure 1.) Ninety-one percent think it is important for the state to be doing more to encourage young people and others to become teachers. 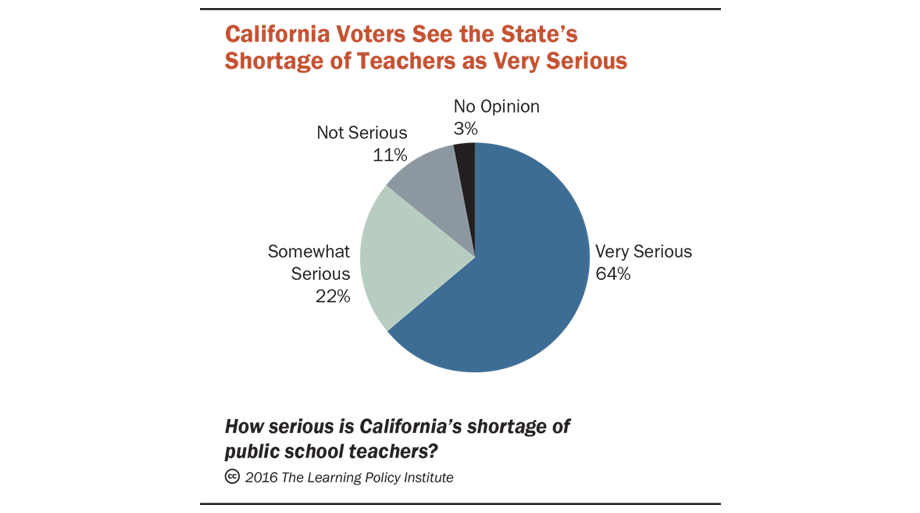 Throughout the summer and into the fall of 2015, school districts across the state struggled to fill vacant teaching positions with qualified staff. At the very time when districts have additional revenue from the state to restore programs and class sizes to pre-recession levels, teacher supply is at an historic low.

According to a recent Learning Policy Institute study, the number of new teaching credentials issued in California has declined steadily for more than a decade, as have enrollments in teacher preparation programs Linda Darling-Hammond, Roberta Furger, Patrick Shields, and Leib Sutcher, Addressing California’s Emerging Teacher Shortage: An Analysis of Sources and Solutions (Learning Policy Institute, 2016).. As a result, thousands of teachers have recently been hired on substandard permits and credentials to fill classrooms where qualified teachers could not be found. The shortages are most severe in special education, mathematics, and science. The state has recently designated nearly all fields as subject to shortages. 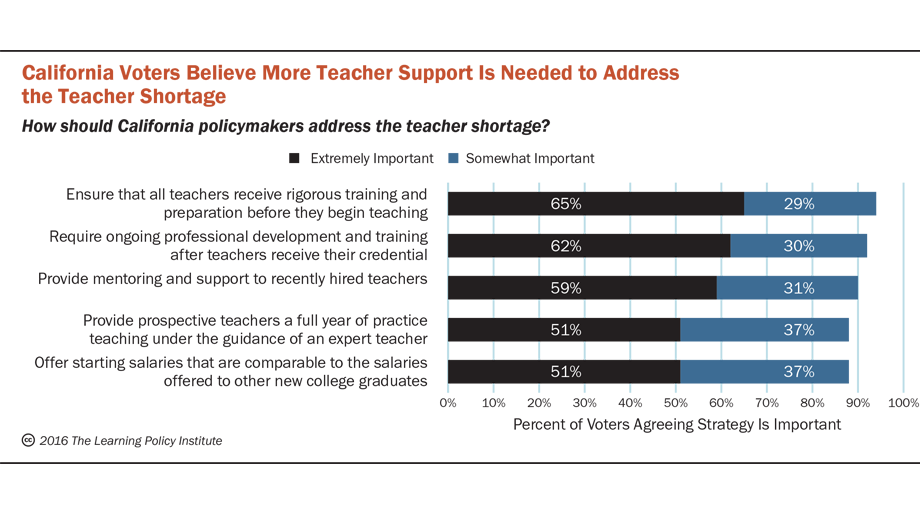 The poll also found that:

California voters believe all children deserve access to a fully prepared teacher and do not think the state should reduce standards for teachers in order to staff classrooms.

California voters expressed broad-based support for policies that are known to be successful at attracting and retaining high-quality teachers. (See Figure 2.)

As California policymakers move to address the current shortages and prevent a more long-term crisis, they do not need to start from scratch. Programs developed to address earlier eras of shortages—most of which have been eliminated in recent years—can point the way.

As California policymakers move to address the current shortages and prevent a more long-term crisis, they do not need to start from scratch. Programs developed to address earlier eras of shortages—most of which have been eliminated in recent years—can point the way. Lawmakers also face big decisions about how to correct teacher imbalances and make teaching a profession that is attractive once again, so talented individuals from diverse backgrounds will want to enter and stay. Acting with foresight now could bring a new generation into the critical work of teaching with the strong preparation needed to provide California’s 6.2 million students with a 21st century education.

What Voters Think About the Teacher Shortage is licensed under a Creative Commons Attribution-NonCommercial 4.0 International License.

Research in this area of work is funded in part by the S. D. Bechtel, Jr. Foundation. Core operating support for the Learning Policy Institute is provided by the Ford Foundation, the William and Flora Hewlett Foundation, and the Sandler Foundation.