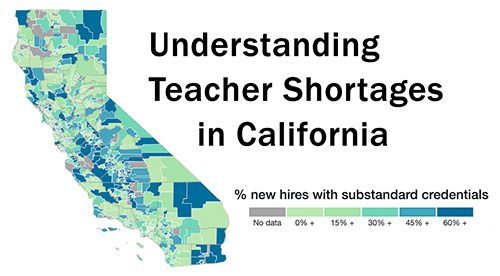 This report was developed as a companion to an online interactive map, Understanding Teacher Shortages in California: A District- and County-Level Analysis of the Factors Influencing Teacher Supply and Demand.

When California students returned to school in fall 2019, hundreds of thousands returned to classrooms staffed by substitutes and teachers who were not fully prepared to teach. In recent years, California has experienced widespread shortages of elementary and secondary teachers as districts and schools seek to restore class sizes and course offerings cut during the Great Recession. Schools experiencing shortages of fully certified teachers often respond by cutting courses, increasing class sizes, and hiring substitutes and teachers on substandard credentials. Although statewide data reveal a deepening shortage across the state, teacher supply and demand factors vary across districts, and as a result, there can be stark disparities in shortages both among and within districts.

This report examines the most recent publicly available data from the California Commission on Teacher Credentialing (CTC) and public- and restricted-use student and staffing data from the California Department of Education (CDE) to highlight the status of teacher supply, demand, and shortages, as well as teacher diversity, in California. The report details the significance of these supply and demand factors and demonstrates how these conditions vary throughout the state. In addition, the report summarizes recent state investments in addressing teacher shortages and examines potential policy solutions to mitigate ongoing shortages. While this report is based largely on data that predates the COVID-19 pandemic, it discusses the key factors now emerging as the pandemic affects California’s teacher workforce.

Is There Still a Teacher Shortage in California?

One of the best indicators of teacher shortages is the prevalence of substandard credentials or permits, which by law should be issued only when fully credentialed teachers are not available. In 2017–18, California issued more than 13,000 intern credentials, permits, and waivers, nearly triple the number issued in 2012–13. The growing number of substandard credentials issued by the state is an indicator that teacher supply continues to be insufficient to meet the demand for those positions.

Given the severity of ongoing shortages and the disproportionate impact of shortages on particular districts, subject areas, and student populations, California may need to consider further action to address chronic shortages.

Teacher supply is composed of the total teacher workforce, including new entrants to teaching and re-entrants, or those who have left teaching but choose to return. New entrants include those who are fully prepared and those who have substandard credentials and permits. Also important are the characteristics of teachers entering and staying in the profession, including teacher diversity.

Demand factors indicate the need districts and counties have to hire additional teachers. These factors include teacher attrition and turnover, student–teacher ratios, recent and projected changes in student enrollment, and the percentage of teachers who are age 50 and older or 60 and older, which can signal the extent to which imminent retirements might create demand for new teacher hires.

The Potential Impact of the COVID-19 Pandemic

The COVID-19 crisis is likely to impact teacher demand and supply in complex ways: The pandemic could increase demand as additional staff are needed to ensure schools can safely reopen with appropriate physical distancing in place; it could also trigger shortages by exacerbating turnover, as many teachers have indicated they may not return to school under current circumstances. At the same time, teacher layoffs could occur if revenues drop as the state and districts grapple with the economic effects of the crisis. In any of these scenarios, long-standing shortages in high-need fields and schools are likely to continue.

In recent years, California has begun to take a proactive approach to addressing teacher shortages. Over the past 4 years, the state Legislature has enacted several initiatives and invested nearly $300 million to build the teacher pipeline and recruit and retain well-prepared teachers. While the largest investments are for programs that have not yet been fully launched, and many of the other investments are for programs that will take a number of years to produce graduates, efforts to rebuild the teaching force are beginning to yield modest results. However, nearly all of these initiatives were funded only on a one-time basis in the state budget. Given the severity of ongoing shortages and the disproportionate impact of shortages on particular districts, subject areas, and student populations, California may need to consider further action to address chronic shortages. Based on research on attracting and retaining teachers, we have identified eight strategies that state and local agencies in California can implement in order to address ongoing teacher shortages, particularly in high-need fields and schools. These include:

This research was supported by the Bill & Melinda Gates Foundation and the S.D. Bechtel, Jr. Foundation. Core operating support for the Learning Policy Institute is provided by the Heising-Simons Foundation, Raikes Foundation, Sandler Foundation, and William and Flora Hewlett Foundation. We are grateful to them for their generous support. The ideas voiced here are those of the authors and not those of our funders.

Cover photo by Allison Shelley for American Education: Images of Teachers and Students in Action.