How Money Matters for Schools

This brief is based upon a report that reviewed research on the role of money in determining school quality. The research documents that resource investments matter for student outcomes, especially when they are directed to under-resourced districts and students from low-income families. The research also shows that spending resources in ways that reduce class sizes for young children and those with greater academic needs and that improve teacher quality have strong payoffs for outcomes. Finally, some research suggests that increasing and equalizing school funding may be most effective when it is part of a comprehensive set of efforts to improve teaching and learning.

While money alone is not the answer to all educational ills, more equitable and adequate allocation of financial inputs to schooling provides a necessary underlying condition for improving the equity and adequacy of outcomes.

For decades, there has been an energetic debate about whether and how money matters for school outcomes. While it is certainly possible to spend money poorly, the view that money does not make a difference is strongly contradicted by a large body of evidence from recent rigorous research, which we discuss in this brief. A thorough review of the research on the role of money in determining school quality leads to the following conclusions:

A Model of How Money Matters

Figure 1 provides a simple model of the relationship of schooling resources to children’s school achievement: The financing of public education systems depends on states’ fiscal capacity—their wealth and income—combined with how they tax states and localities. 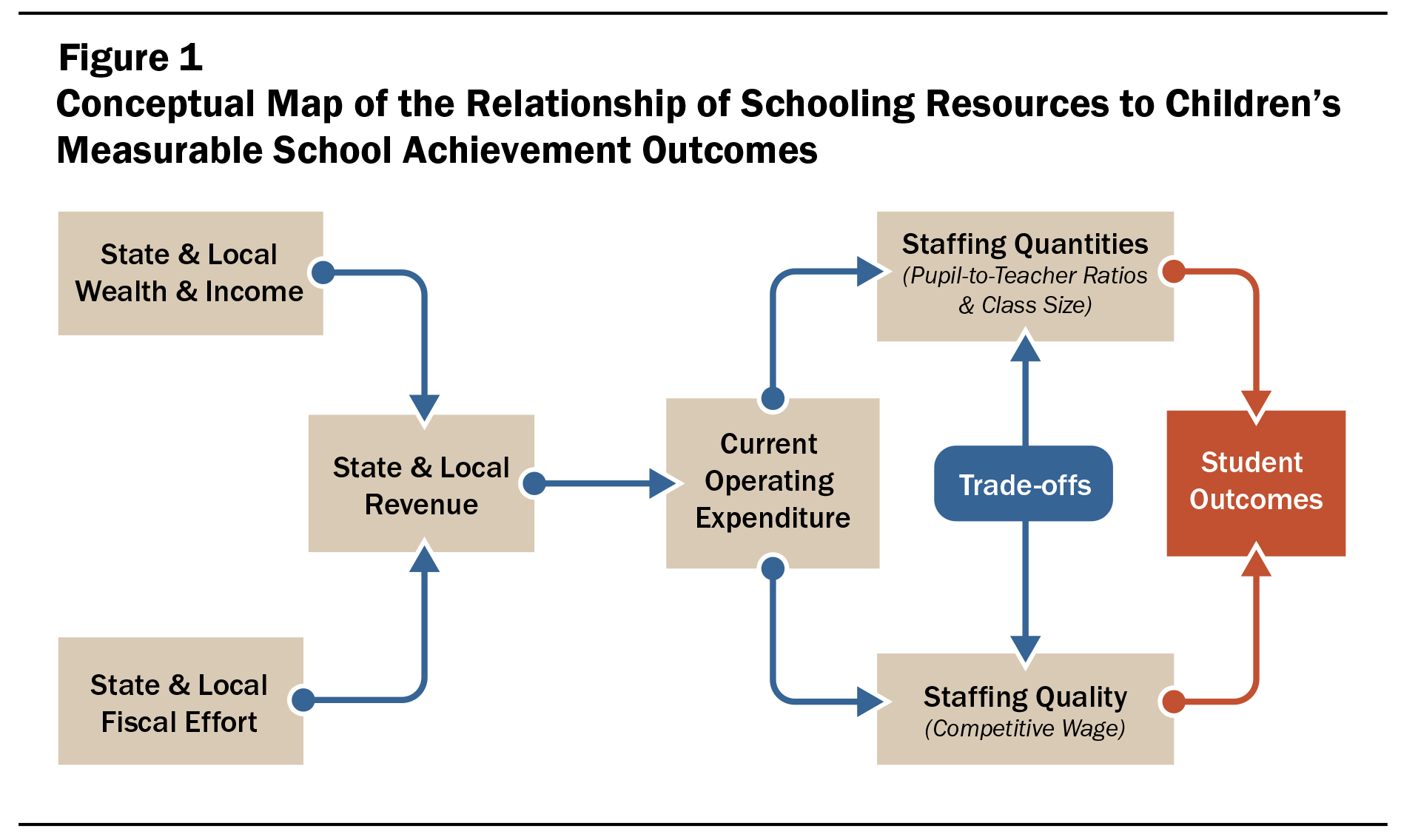 As a rule of thumb, for a state school finance system to provide equal educational opportunity, that system must provide sufficiently higher resources in higher need (e.g., higher poverty) settings than in lower need settings. Such a system is called “progressive.” By contrast, many state school finance systems barely achieve “flat” funding between high- and low-need settings, and still others remain “regressive,” spending more money on the education of more affluent students than on those who have greater needs.

What About the Debate That Money Doesn’t Matter?

The best evidence shows that money spent wisely has a significant impact on positive student outcomes. Nonetheless, there are those who continue to question this finding based upon research conducted in the 1960s and ’70s that seemed to suggest that money does not improve student achievement. However, many of those studies had serious methodological flaws and would no longer pass muster, given advances in data quality and statistical techniques (see “Summing It Up” below).

By the late 1990s, the cloud of uncertainty around the positive effects of school funding had largely been clarified or answered by rigorous studies using newly available large data sets allowing longitudinal analyses of individual student and school-level data, like the large-scale national study described above. A 1996 studyGreenwald, R., Hedges, L., & Laine, R. (1996). The effect of school resources on student achievement. Review of Educational Research, 66(3), 361–396. conducting rigorous meta-analyses of one of the most widely cited of these earlier reports found that the report’s original conclusion—that money did not influence student outcomes—was incorrect. This study noted,

Today, the evidence is clear that money that is thoughtfully and equitably spent does matter. Schools and districts with more money are able to provide higher quality, broader, and deeper educational opportunities to the children they serve. Furthermore, the absence of adequate funding and deep cuts to existing funding leave schools unable to do many of the things necessary to develop or maintain the key elements of a quality education. As a result, achievement ultimately declines.

Summing It Up: What About the Arguments That Money Does Not Matter?

Beginning in the 1960s, some researchers argued that family background and other circumstances explain so much of the variation in student outcomes that there is no consistent relationship between school funding and student outcomes. This position, however, is no longer tenable because:

Evidence From the States

Over the years, several state-specific studies of school finance reforms have validated the positive influence of those reforms on a variety of student outcomes. Massachusetts and Michigan reforms of the 1990s are among the most studied because both states implemented significant reforms of their school finance systems that were maintained for a decade or more, although both have now waned to some extent.

Evidence from Massachusetts suggests that appropriate combinations of more funding with thoughtful standards and supports for students and teachers were a productive solution for linking funding with positive learning outcomes. Following the 1993 McDuffy v. Secretary of Education ruling in which the Supreme Judicial Court held that “the education clause is not merely aspirational or hortatory, but also imposes on the Commonwealth an enforceable duty to provide an education for all its children, rich and poor, in every city and town through the public schools,”Massachusetts Department of Elementary and Secondary Education. (n.d.). The State Constitutional Mandate for Education: The McDuffy and Hancock decisions. Massachusetts adopted a package of far-reaching education reforms that included a new education funding formula under Chapter 70 of the state code. State aid per pupil scaled up dramatically from 1995 through 2000 and then climbed more slowly through 2015. Over the period when state aid to high-poverty schools increased significantly, high-poverty districts received 40% more state and local funding per pupil than low-poverty districts.

In the early 1990s, Michigan also enacted state school finance reforms that reduced inequality in spending among rich and poor districts. Between 1993 and 2003, both revenues and expenditures increased by 60%, while funds were more equitably distributed. Research confirmed that reducing interdistrict spending disparities had a positive effect on student performance in lower performing districts.Papke, L. (2005). The effects of spending on test pass rates: Evidence from Michigan. Journal of Public Economics, 89(5–6), 821–839. Similar findings have been replicated in other states, including Vermont, where studies of the Act 60 school finance reforms in the late 1990s concluded the initiative “dramatically reduced dispersion in education spending by weakening the link between spending and property wealth.”Downes, T. A. (2004). School finance reform and school quality: Lessons from Vermont. In Yinger, J. (Ed.). Helping Children Left Behind: State Aid and the Pursuit of Educational Equity (pp. 283–313). Cambridge, MA: MIT Press. This in turn led to more equal student performance.

A study of the effects of the 1992 school finance reforms in Kansas, which involved a leveling up of low-spending districts, found a 20% increase in spending was associated with a 5% increase in the likelihood of students going on to postsecondary education.

How Money Is Spent Matters

Increased funding tends to lead to reduced class sizes as districts hire more teachers, and to more competitive teacher salaries.Baker, B. D., Farrie, D., & Sciarra, D. G. (2016). Mind the gap: 20 years of progress and retrenchment in school funding and achievement gaps. ETS Research Report Series, 2016(1), 1–37. A significant body of research points to the effectiveness of class size reduction for improving student outcomes and reducing gaps among students, especially for younger students and those who have been previously low achieving.Baker, B. D. (2016). Does money matter in education? Washington, DC: Albert Shanker Institute. Often studies find that the effects of class size reduction on achievement are greatest when certain smaller class thresholds (such as 15 or 18) are reached, and are most pronounced for students of color and those in schools serving concentrations of students in poverty.Mosteller, F. (1995). The Tennessee study of class size in the early school grades. The Future of Children 5(2), 113–127; Nye, B., Hedges, L.V., & Konstantopoulos, S. (1999). The long-term effects of small classes: A five-year follow-up of the Tennessee class size experiment. Evaluation and Policy Analysis, 21(2), 127–142; Kim, J. (2006/2007). The relative influence of research on class-size policy. Brookings Papers on Education Policy, 273–295. Smaller classes for young children have long-term effects on outcomes many years into the future.Kim, J. (2006/2007). The relative influence of research on class-size policy. Brookings Papers on Education Policy, 273–295; Glass, G.V., & Smith, M. (1979). Meta-analysis of class size and achievement. Educational Evaluation and Policy Analysis, 1(1), 2–16.

Spending to achieve competitive teacher wages also matters. A substantial body of research validates the conclusion that teachers’ overall wages and relative wages affect the quality of those who choose to enter the teaching profession—and whether they stay once they get in. Increases in teacher wages have also been found to be associated with increased student achievement—presumably because more capable teachers are recruited and retained.Ferguson, R. (1991). Paying for public education: New evidence on how and why money matters. Harvard Journal on Legislation 28, 465–498; Greenwald, R., Hedges, L., & Laine, R. (1996). The effect of school resources on student achievement. Review of Educational Research 66(3), 361–396.; Loeb, S., & Page, M. (2000). Examining the link between teacher wages and student outcomes: The importance of alternative labor market opportunities and non-pecuniary variation. Review of Economics and Statistics 82, 393–408.

What do these findings mean for legislators and other policymakers? What are the actionable policy implications?

Certainly, there are more policy and legislative implications of the research reported in this brief. And ensuring that all schools and school districts are adequately and equitably funded is a difficult political and technical task. But as the data in this brief makes clear, if we don’t undertake this task, generations of students will not have access to the quality education they need and deserve.

How Money Matters for Schools (research brief) by Bruce D. Baker is licensed under a Creative Commons Attribution-NonCommercial 4.0 International License.

This brief and the research report on which it relies were supported by a grant from the Raikes Foundation. Core operating support for the Learning Policy Institute is also provided by the Ford Foundation, the William and Flora Hewlett Foundation, and the Sandler Foundation.