This blog is part of the series, Education and the Path to Equity, examining issues of education and equity 5 decades after the Kerner Commission issued its seminal report on racial division and disparities in the United States.

Fifty years after the Kerner Commission warned of a nation divided, school funding remains profoundly unfair and inequitable in most states, shortchanging  students across the country. Those most disadvantaged by this enduring failure are millions of children from low-income families and children of color, especially those in high-poverty, racially isolated communities.

In the United States, public education is a state obligation. The states, through their finance systems, account for approximately 90% of all education funding in local districts and schools.

Every day in schools across America, the lack of funding deprives students of the qualified teachers, support staff, academic interventions, full-day kindergarten, early education, and other programs they need to be successful in school. Unfair school funding remains entrenched in most states, as it has for decades, impeding efforts to improve outcomes for students, especially poor children, those learning English, and students with disabilities. 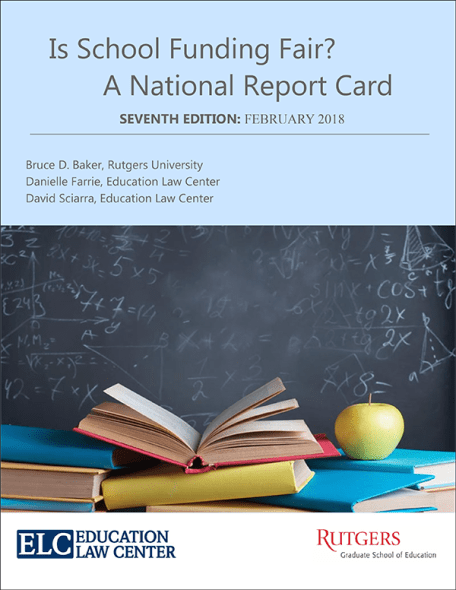 The deplorable condition of state school finance is laid bare in the 2017 edition of the National Report Card, Is School Funding Fair? This report goes beyond raw school spending by analyzing both the funding level in each state and whether funding is greater in higher-poverty school districts.

There persists a wide gulf in how much states invest in public education, from $18,719 per pupil in New York to $6,277 in Idaho. Most states also fail to allocate more funding to high-poverty districts so they can deliver the resources necessary to give students from low-income families the opportunity for academic success.

Seventeen states, including Virginia, Connecticut, and Texas, have “regressive” school funding, which means they provide less funding to their high-need districts than wealthier ones. Nevada is the nation’s most unfair, with low spending and less money for a burgeoning population of students from low-income families and those needing English language instruction.

Twenty states, including New York, South Carolina, and Michigan, have “flat” funding. These states fail to allocate additional funds to address the academic, social, and health needs of students in their poorest schools. Some of these states, such as North Carolina and Oklahoma, send a very modest increase to poor schools, but rank at the bottom of the nation in overall spending.

Only a few states, notably Massachusetts and New Jersey, fairly fund their schools. These states provide sufficient funding and significantly higher funding in the poorest districts. They also are the nation’s highest performing overall, with students from low-income families making strong gains.

Even more disturbing is that many states with unfair school funding make little effort to invest in public education. States such as Florida, Texas, and Arizona have economies that can support greater investment, but are unwilling to do so.

California, by contrast, has made substantial new investments in recent years to boost funding to its high-need schools, and recent evidence suggests the new finance system is paying off in higher achievement and graduation rates in those districts. Yet per pupil spending in California is still among the lowest in the country.

For our students, this is not about dollars. Funding levels determine whether effective teachers, Advanced Placement classes, guidance counselors, extra learning time, and other essential resources are available in the nation’s classrooms. In states with unfair funding, children are less likely to have access to preschool, pupil-to-teacher ratios are higher, and wages for teachers are not competitive with other comparably skilled professions. The chronic and severe underfunding of public education is behind the wave of teacher strikes and walkouts now sweeping across the nation.

The sad fact is most states still fund schools the old-fashioned way. Lawmakers decide how much they’re willing to spend, usually based on last year’s budget, and then distribute funding to satisfy powerful political constituencies. Only a handful have enacted finance reforms driven by the actual cost of basic education resources, including the cost of supports for struggling students and other interventions crucial in high-need schools.

In many states, elected officials staunchly resist school funding reform, even in the face of court orders, as is now the case in Kansas. Governors in Colorado, Texas, and Connecticut have fought funding lawsuits rather than use the courts to leverage action by recalcitrant lawmakers.

Unfair school funding is a major reason why our nation remains segregated, separate, and unequal a half century after the Kerner Commission issued its call to action. It’s time to put this issue at the top of the national education agenda.

David G. Sciarra is Executive Director of Education Law Center and a co-author of the National Report Card.